The place where history meets mythology, tradition meets culture, myth meets reality. Tempi or Vale of Tempi is formed between the Mount Olympus and Kissavos (Ossa), in the centre of Greece. 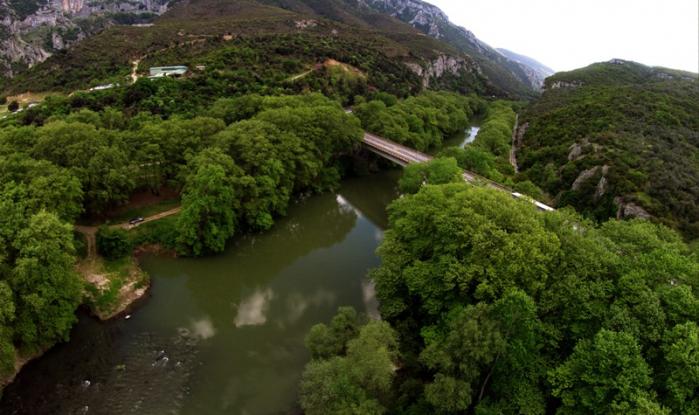 According to the legend, the valley opened by Poseidon’s trident.  Another myth narrates the love of the god Apollo for Daphne, the daughter of Pineios. It is the place where Apollo chose to cleanse himself for the murder of Python when he took over the Oracle at Delphoi. Here he fell in love with Daphne, the Nymph that became his sacred plant. The old pilgrims headed towards Delphoi carrying laurel leaves from the valley of Tempi to the Oracle to honour the god Apollo. The Sacred Laurels were cut from the “Holy Narrows” for crowning the athletes who participated during the opening and the games Pythia.

Tempi or Vale of Tempi is formed between the Mount Olympus and Kissavos (Ossa), in the centre of Greece. The valley is 10 kilometres in length, while on its narrowest point a gorge is formed 25 metres in width and depth about 500 metres. River Pineios runs through it, which then flows to the Aegean. Tempi constitute the main passage from Macedonia to Thessaly and for this reason the area was of great importance since antiquity.

Today, the railway passes through the area along with the national road Athens-Thessaloniki. On 2017 2 tunnels that by-pass the valley were inaugurated, one of which is the longest road tunnel in Greece and the Balkans.

The name of Tempi remains the same since antiquity. During the Turkish occupation, Tempi was also called Baba. The iron hanging footbridge that crosses the Pineiosriver constitutes a reference point and is necessary in order to visit the monastery of Agia Paraskevi built in the rock of Olympus and to admire the virgin landscape! Next to the church, there is a small cave where the initial pilgrimage is found, where the holy water of Agia Paraskevi flows at its end.  The cave is so small that only one person can go in at a time.

Tempi constitute a refuge for many birds-waders and birds of prey (225 species, including cormorants, herons and flamingos), while aquatic plants (planes, aspen, willows, etc.), growing in the waters of the river, forests of planes and rare flowers on the rocks, compose the landscape.