Larissa s one of the most ancient cities and has been inhabited for over 4.000 years. Here lived and died, nearly ninety years old, the Father of Medicine, Hippocrates.Larissa is the Mistress of the Flatland of Thessaly and has to demonstrate lots of Ancient, Byzantine, Ottoman Monuments, Museums and other sights. 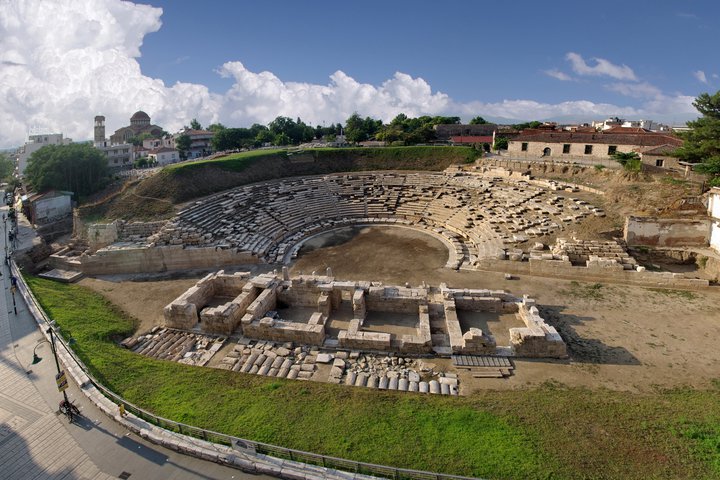 Larissa s one of the most ancient cities and has been inhabited for over 4.000 years. According to the archaeological surveys the area of Larissa had been inhabited during the Paleolithic Period. The power of the city had the Alevades of Thessaly until the end of the of the dominion of the Macedonians. During the years of the Persian Wars, its inhabitants turned against the Greeks and fought by the side of the foreign intruders. During the Peloponnesian War they fought by the side of Athens. Larisa has its own money and plenty of the ancient coins have been saved. In Larissa lived and died, nearly ninety years old, the Father of Medicine, Hippocrates.

Larissa is the Mistress of the Flatland of Thessaly. It is a modern city, an important railway and runway junction, which connects Volos with Thessaloniki and Athens. It is known for its agriculture (fruits, wheat, vegetables, smoke), communications and it has an important military unit. It also has to demonstrate lots of Ancient, Byzantine, Ottoman Monuments, Museums and other sights.

Some of the most important monuments are

The Acropolis of Larissa

It is located in the hill of Aghios Achillios, and it is also known as Frourio. According to the ancient findings, the area had already been inhabited since the Neolithic Era (6.000 b.C.). The signs that were found along with the excavations revealed that during the Classical Era, the Acropolis of Larissa was placed at the same spot. During the first years of the Eastern Roman Empire, the Byzantines had chosen the same place, in order to build their Acropolis.

His last station was the land of his ancestors, Thessaly, where he remained until the end of his life. He passed away in Larissa in 377 B.C., at the age of 83 years old and was buried somewhere between Gyrtoni, Tyrnavos and Larissa. According to Anthimos Gazis, his tomb was preserved until the second sendury A.D.. He also mentions that for many years there was a swarm of bees on Hippocrates tomb, the honey of which had the capacity to cure children’s sores.  A cenotaph exists in Larissa and the quarter with the same name, along with the bust constructed by sculptor Georgios Kalakallas. The erection of the museum was inspired by the head physician Dimitrios Paliouras. The procedure for the erection of the monument began on 1966 and the inauguration took place on 1978. A Medical Museum was founded on 1986 by Dimitrios Paliouras in the area of the cenotaph. Bronze busts of Hygieia, Asclepius, Apollo, Fleming, G. Papanikolaou and the founder exist in the museum. There is also an archive with documents regarding the effort of Dimitrios Paliouras for the graduates of Greek Medical Schools to give the oath of Hippocrates.

The A’ Ancient theatre of Larissa

It was built during the first half of the 3rd century B.C., during the times of the king of Macedonia Antigonos Gonatas, given that after the death of Alexander the Great, during the Hellenistic Period, Thessaly was a part of the kingdom of Macedonia. It was built at the south side of the hill of Frourio, where during the ancient times was the fortified acropolis of the city and it is one of the most important and biggest theatres of that period. It is an imposing building and it is thought to had hosted almost 12.000 viewers.

The Diachronic Museum of Larissa

It is located in the hill of Mezourlo, in the south part of the city. It is the only diachronic museum in the whole country and it is the most important museum in Thessaly, as it is one of the ten biggest museums in Greece. In this Museum it is exhibited the archeological treasure of Thessaly from the Paleolithic Times until its liberation from the Ottomans in 1881.

It was a covered marketplace of fabrics during the Ottoman Empire. It had been built in the highest point of the hill, in the ancient acropolis of Larissa, also known as Frourio and it dates back in the end of the 15th century and beginning of the 16th.

The origin of the name of the city, Larissa, inspired a lot of myths, through which the Thessalians were trying to explain the origin of the name and to hymn their capital, whose foundation is lost back in time. Its name is of Pelasgian origin and it means a fortress or acropolis. According to one theory, the nymph Larissa was playing with her ball aside to Pineios River, she slipped and drowned into its waters. So the city was named after her. Larissa, according to the myth, was the wife of Poseidon ad mother of Achaios, Pthias and Pelasgos. According to another version, Larisa was built by Larissos, the son of Pelasgos almost 4.000 years ago.